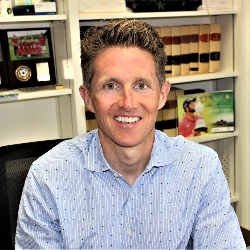 Damien is a 2000 graduate of York College of Pennsylvania earning his BS degree in Economics and Finance. In 2001 he graduated from York College with his M.B.A. in General Business. He earned his CFP® certification in 2003 through The American College and has worked in the financial planning field, with Diana and Brad since 1999. In addition to his financial planning designation, Damien also holds the FINRA Series 7 and 66 registrations through LPL Financial. Damien is a current board member of the Financial Planning Association (FPA) and will be serving as a member of the York College Graham School of Business Advisory Council. He also is a classroom volunteer for Junior Achievement.

Damien and his wife, Michelle, were married in May of 2004 and have two sons, Liam and Keenan. He enjoys spending time with his family as much as possible. Damien is an avid runner who has run the Boston Marathon, as well as, across The Grand Canyon and through the Grand Tetons. He is actively involved in coaching youth sports and assisting with many of his son’s activities.